From the previous part … “which requires a transition of the whole of society.”

I myself have also experienced a significant transition. With my bike I made a big crash. This was in 2014 which left me with a major wound on my head and blood in my brain. As a result, I had symptoms that prevented me from walking, speaking and seeing properly. As a result I had to learn to walk again, tie shoelaces and train the motor skills in my left hand. In order to understand the circular economy, it is necessary to relearn a number of things. Relearning to look, relearn to talk and relearn to walk in this unfamiliar environment.

Before the accident I was always very busy with a thousand and one things, I often arrived late and felt constant stress. For example, when I got up in the morning, it was always a race against time. Have a quick breakfast, freshen up, get dressed, brush my teeth and get myself ready for the day. I wanted to contribute to this world and thought that the more I could do the better it was. For example, I had several side jobs, I was active at various associations, I did a training that required more than full-time time and I wanted to be with friends. The days passed quickly and I was living in a kind of rush; like being high.

It’s an express train I can’t stop, I thought. The accident made it a forced emergency stop. And very strangely when I woke up in a hospital bed, I felt very peaceful and fine. I didn’t need anything anymore and was just allowed to ‘be’. Nothing to do, no hurry, no pressure, … wonderful while I lay there with a wound on my head and only half realized what had actually happened.

After the accident I went to rehab and learned to walk again, among other things. I also got fitness several times a week. And then I noticed something strange. I would also exercise more often, which would not speed up my recovery. In other words my physical improvement is not directly equal to my level of exertion. I needed a lot of sleep during that period and liked to take a nap at noon. I didn’t miss the rush that I thought I liked so much before. This made me doubt my assumption; is more better? 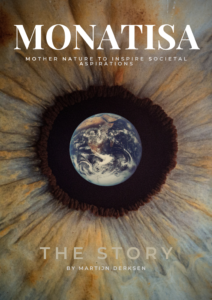 Is there another way I wondered. The answer came in the form of a quote that I saw on the internet: “Nature is in no hurry, and yet everything is accomplished.” There we have nature again, I thought to myself. That was a reason for me to reflect again on the model of Mother Nature. Think about it for a moment with the following questions. Who is Nature’s CEO? Who owns a tree, plant or piece of land in the jungle? Is everything in nature dependent or independent of each other? Can you explain how that is with a mosquito and a giraffe?

The penultimate question was not entirely fair, because there is a third answer possible: it is both dependent and independent. In nature everything is interdependence (also called mutual dependence) on each other. This means that everything is simultaneously dependent and independent of each other. It is a false contradiction to choose one or the other. These kinds of questions unconsciously train us in either-or thinking, thinking in separations. It’s either this OR that, not both.

As a child everyone is completely dependent on a parent, as you get older, you want to be independent or the environment stimulates this. And as an adult you will experience that you are simultaneously dependent on others but also make independent individual choices. You could also explain dependence differently. Namely that everyone is programmed in their early years, usually with the best of intentions. And that you want to become independent of this programming, but always deal with it. You can then look for a way to make your programming, your habits, work for you. In balance you then arrive at mutual dependence: dependent and independent at the same time.

That immediately gives us a nice lens to look through. So it is day or night from our individual perspective. But from the perspective of the entire planet, it is always day and night at the same time. These are also the glasses we use to look at the Earth; as one interdependent whole. You could also call this a holistic perspective, always taking the whole into consideration. Our planet is a complex entity that we don’t know everything about. That always reminds me of the ‘Circle of Life’

This was part #2 of this series, for a sneak peak of what is to come please visit:  www.monatisa.com